The Illusion of Control

A few weeks ago, I wrote about the Singularity -- when machines might wrest intellectual power from us humans and take us into even more uncharted waters.  (Incidentally, that post got me my first internet quote.  Thanks, Rob!)  But it seems, in some cases, those wily engineers have already taken power from us.

This post will provide a few examples of cases where you thought you had control of something, but you usually don't.  If you enjoy living in ignorant bliss, you may not want to read much further. 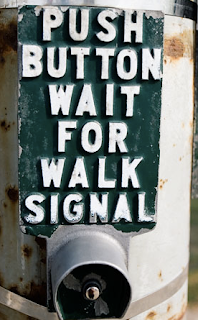 Don't bother.  According to the regional NYTimes article linked above, over 2,500 out of 3,250 of the buttons don't work.  They're placebos.  Their best purpose in life is to give you something to do while you wait for the computer-actuated signal to turn colors.  The complex, carefully calibrated system is far too important to interrupt its busy schedule to make a special exception for you to cross the street.  This is not a new development, either:


By the late 1980's, most of the buttons had been deactivated, their steel exteriors masking the lie within. But city officials say they do not remember ever publishing an obituary, and the white and black signs stayed up, many of them looking as new and official as ever.

Case #2: Office thermostats.  Those gray boxes with a dial or two on the wall?  Their main purpose is to prevent you from calling the thermostat technician. 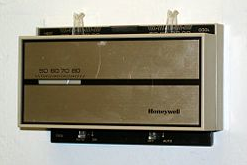 They don't do squat.  Trust me, the energy saved by your pointy-haired boss in regulating the temperature to some optimum level is worth far more than your temporary, puny discomfort.  And think about it: your average HVAC company has to deal with not just you, not just your neighbor, but probably 10 or 20 different office buildings, all in the same situation.  What would you do?


Does he feel bad? "I did what my employer told me to do," Mr. Dawson says. The complainers in the cubicles wore him out. "You just get tired of dealing with them and you screw in a cheap thermostat. Guess what? They quit calling you."

Case #3: Elevator Door Close buttons.  This one shocked me.

That "close door" button on elevators? It won't work unless you're a fireman or an elevator operator with special access to the system. The rest of the time, in deference to various building codes, it's deactivated, according to engineers at Otis Elevator.

All those buttons are doing are giving you something to pass the time while a computer whirrs happily in the background, waiting for some specified timer to expire.

I never did get a response back directly from Senator Inhofe, which isn't surprising.  A senator unlikely to respond to every Tom, Dick, and Harry who emails him or her, even if s/he does have a large staff.  I (naively?) hope they have better things to do, even if my e-mail was particularly well crafted.

But all is not lost: the NRC did take a vote, and the votes have become public.  In an effort to just get on with it, I'm just going to point you to this site, which has all the gory details, and continues to track the issue a lot closer than I will:

This whole issue would be more amusing if there weren't tens of billions of dollars at stake.
Posted by TheEngineer at 4:50 PM No comments:

Back in February, I posted about the shenanigans that are taking place around the Yucca Mountain issue.  To summarize, the Department of Energy basically threw up its hands and said, "Forget it.  Burying spent nuclear fuel at Yucca Mountain is becoming too much of a hassle, and we're going to go back to the drawing board."

The Nuclear Regulatory Commission (NRC), which has been dutifully processing and reviewing the DOE's Yucca Mountain request for the past 3 years, didn't want to get directly involved with this matter.  So the NRC asked the Atomic Safety Licensing Board (or ASLB, a particularly brainy division of the NRC) to look at the DOE's decision in detail and give a recommendation back to the NRC.  Makes sense, right?  "Here, go take a look at this thorny issue and tell us what you find."

In June 2010, the ASLB issued a statement (PDF), waving the "baloney" flag vigorously.  That pdf is one of the most brilliantly written pieces of governmental language I've ever read, and it truly gives me hope in the future governance of our country.  Seriously.  It's clear, direct, thorough, and actually readable -- if a bit long after page 16 or so.  It states:

There are some other really juicy quotes in there.

Did Congress, which so carefully preserved ultimate control over the multi-stage process that it crafted, intend—without ever saying so—that DOE could unilaterally withdraw the Application and prevent the NRC from considering it? We think not.

So the ASLB came back to the NRC and said, "No Way."  Per the law, if Yucca Mountain is to be truly axed, it must be done by Congress.

And here's where it gets really interesting.

Why, oh why, would the NRC do this?  Its own brainy division told it that it couldn't stop the review, even if DOE wanted to.  One strong possibility is the lingering connection between the Chairman of the NRC, Gregory Jaczko, and Harry Reid, Senate Majority leader from Nevada who has tried to stop Yucca Mountain from being operated in Nevada at all costs.  Before becoming chairman of the NRC, Jaczko was Harry Reid's appropriations director.

So, earlier this week, Senator James Inhofe from Oklahoma again restored my respect and hope in those who govern this country.  In a letter to each of the NRC Commissioners, he politely and directly asked two questions:


This is brilliant in its simplicity: hold governmental organizations accountable.  I wish there was more of this.  I sent a letter to Senator Inhofe, congratulating him, and asking if he'd received any response from the commissioners.  No word yet, but I'll be happy to pass it along if I hear anything.
Posted by TheEngineer at 6:02 AM No comments: