A Societal Abdication of Responsibility

There's an alarming trend here in political society, and I don't like it.


Look, all of the above are examples of people trying to worm their way out of previous responsibilities, agreements, and commitments -- and have the government bail them out.  I think that's unconscionable.  There are very real costs associated with every one of those bailouts, and it's not fair to put that burden on Uncle Sam.  John Sununu put it extremely well in last week's issue of Time magazine:


Lost amid this economic activism is the principle that laws should clarify and facilitate the process for dealing with insolvencies but never pretend they can be avoided.  To think otherwise constitutes a form of legislative arrogance ... Too many lawmakers believe government can oversee, manage or invest with more insight and efficiency than the marketplace. [emphasis added]

An inherent facet of our economy, one that must be acknowledged and embraced, is that something like 10% of all American companies fail every year.  As painful as it is in the short term, failure -- and learning from those failures -- is a fundamental part of what makes our society stronger.  Failures happen.  Society needs to address those failures (and I think that, for the most part, it has), but in no way is the government responsible for preventing those failures.  And while I have sympathy towards those who put themselves $100,000 in debt in pursuing their degree in art history, as a taxpayer, I feel no obligation towards bailing them out.  Those students knew darned well what the obligations were for student loans, and what their chances were for employment on the other side.

People agree to commitments all the time.  I wish people would think a little more carefully about the implications before they make big commitments.
Posted by TheEngineer at 4:38 PM No comments:

Every Accident Can Be Prevented ... but At What Cost?

It has become popular and trendy in most business circles to tow the party line of, "Every Accident Can Be Prevented."  Safety, safety, safety.  Slips, trips, and falls.  Electrical hazard safety.  Ladder safety.  Ergonomics.  It's everywhere, and we often have to sit through endless sfaety videos about why we need to do this, pay attention to that, be on the lookout for gremlins ... and now I see this philosophy creeping into the hallways: 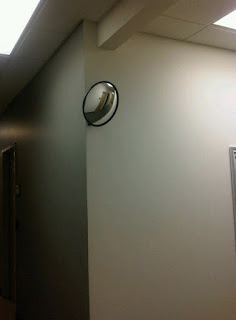 Yes, my place of employment has now taken to putting up mirrors on the corners of the hallways, in order to prevent burns from hot coffee that might be incurred by two people bumping into each other.  I also recently saw a street crossing, with a pile of orange flags at each end of the crosswalk.  The thinking is you're supposed to grab a flag and wave it as you cross the street, so cars don't hit you.
Here's what I get: liability is expensive.  In the construction industry, it's bad news if your company has a reputation of being unsafe.  Lawsuits are absurdly expensive, to the tune of $1M+ for injury, lawyer fees, and additional insurance costs, and they can skyrocket from there.  And it's additive: have 1 accident, and your comapny's accident insurance goes up.  So, sure, it makes financial sense for a company to invest $100,000 in making an environment safer, if they think it'll help prevent a $1M accident that only has a 10% chance of occurring.  In industries where people work in close proximity to large, rotating equipment -- it makes a lot of sense to ensure people don't get caught in the gears.
Here's what I don't get: the unbridled, pervasive, never ending burden of safety requirements, and the safety officer's unchecked ability to Stop Work for an arbitrarily small potential safety issue in non-hazardous environments.  Nobody seems to calculate the cost, the reduced ability to do work, the impact to productivity, or the imapct to morale of requiring everyone to take three levels of electrical safety training until they can work on their 100V, milli-amp equipment again. (Note to non-technical readers: a high voltage is not necessarily dangerous.  The spark you get from static electricity in the wintertime can be 6,000 volts or higher.  No big deal, becuase the current is really low.)  Or the lost time due to requiring everyone in the company to sit through this year's collection of 12 safety videos, complete with quizzes at the end.
Note to safety officers: As an office worker, I assure you, I have forgotten everything about that ladder safety quiz within 2 weeks.
Here's what I also don't get: A draconian, inflexible rule system.  In many instances, you're given limits within which you're allowed to do your work.  If you're a Level 1 worker, for instance, you get to do A, B, and C.  But if you want to do 1.000000001C -- something just barely outside the norm of C -- then suddenly the door slams down and you need to get Level 55 worker training, which takes six months and costs thousands of dollars.  Safety officers gleefully point to the rule book and say, "I'm not authorized to grant an exception.  This is for your own good."
Sometimes I pine for the (perceived) halcyon days of the 1950's and 1960's, where I get the impression that you could saunter down to your technical area, and start doing work.  Look, you pay us professionals well and we're smart people; when we get into unfamiliar territory or we do something we're not comfortable with, we ask for help.
I fear that the "scope creep" of allowing people to do less and less because of some infinitesimally small chance that something might go wrong is creating a "never try" attitude in society.  Preventing me from doing anything because something might go wrong seems a perverse motivation, after they ostensibly hired me because of my intelligence and dilligence.  A different society, one that allows and accepts a certain low-level of accidents could be a very productive society indeed.
Posted by TheEngineer at 5:18 PM No comments:

There's a big day coming up -- and this is something you can share with friends, family, and co-workers.

This Friday is Veterans Day.  It's held on November 11th (or observed on the nearest weekday, since it is a Federal holiday and all), in honor of the signing of the Armistice that officially ended World War I.  It was signed on the eleventh hour of the eleventh day of the eleventh month ... of 1918.

But this year's Veterans Day will be particularly notable, because this is the first time it will be held in a year ending in 11.  Here's a preview of what you can expect to see -- TWICE -- this coming Friday:


The delay on my camera stinks; it took multiple shots and resets of the watch to time it correctly.  You may now return to your usual level of Geekery.
Posted by TheEngineer at 5:56 PM No comments: 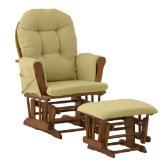 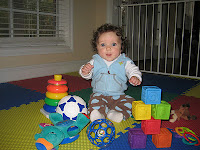 And that's about it!  Happy Parenting.
Posted by TheEngineer at 4:40 PM 1 comment: