Often, when one is trying to navigate the twisted pile of spaghetti that is the DC roadway system, there comes a case of information overload.  The beginning of Canal Road, where it splits off from Foxhall road, is one such instance.  Glance at the picture below, as if you were driving at the posted speed limit of 35 miles per hour, and tell me if you can comprehend and process all of it: 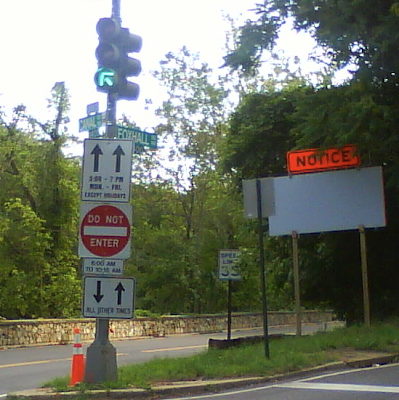 Quick: it's 4pm on a Wednesday; should you make the turn?  If you have to think for more than about 0.4 seconds, you're too late.  You've either missed the turn, or you're now driving the wrong way down a one-way street.

I'm also standing at about the point where cars make the turn.  The print on the signs really is that small.

I completely understand the traffic designer's need to make traffic flow as smoothly as possible during the rush hours.  In this case, both lanes of Canal Road are one-way into the city (as in, opposite the way I'm facing for this picture) during the morning rush hour from 6:00 am until 10:00 am.  But then both lanes are going OUT of the city from 5pm until 7pm Monday thru Friday, except holidays.  All other times, it's two-way traffic.  On paper, or on the static desk of a traffic engineer's workspace, that probably makes sense.

But in practice, as shown in the above, there's just no way that a driver can process all that.  There are no signs preceding this one to tell you what's coming up.  There are no electronic overhead signs to tell you which lanes are valid and which ones are not.  And I bet it doesn't get any better when that orange traffic sign is uncovered. (I didn't peek to see what it says.)  Frankly, I see the giant DO NOT ENTER sign and keep on going.

The GW Parkway, on the other side of the river, is a much better way to get out of town.
Posted by TheEngineer at 6:48 PM No comments:

Everybody else is blogging about the BP oil spill, so I thought I'd join the fray.  But from an engineering perspective.

As the annals of history evaluate and scrutinize the events in gory detail of case study after case study, I believe that adding the dispersant will emerge as the worst single decision in the entire crisis.

This problem is a lot like reactor theory.  You have a diffuse gas (oil) in a dispersive medium (seawater).  There is a source term (the leaking pipe).  The approximations of reactor theory were built for this kind of stuff.

The fundamental equation here is the scalar Helmholtz equation, drilled into every nuclear engineer's early education:

D is the diffusion coefficient; it's how fast the oil "bleeds" through the water.
Sigma(a) is the absorption coefficient.  This is the "loss term" that the title of the blog talks about.
S is the source term, and it's estimated at 12,000 barrels per day.

The "sigma-a phi" term describes how fast it's absorbed by something in the water -- the loss term. The loss term is either:
1.  Falling out of solution and ending up on the seafloor,
2.  Washing up on beaches, or
3.  Being eaten by tiny microbes.

But those microbes take a long time to eat up oil.  This webpage and video by the makers of Corexit is helpful and informative.

As of May 25th (which is a week ago at this writing), over 830,000 gallons of Corexit had been dumped into the water to break up the large globules of oil into tiny droplets that dispersed.  In the equation above, this makes D go from a small number to a huge number, and spreads the oil farther.  Without dispersant, you'd have a large, globular, sticky mess.  With Corexit, you have an even larger mess that can distribute and diffuse over a much larger area.  It does not speed up the oil-eating process fast enough to allow the microbes to eat the oil before it washes ashore!

Let me say it again, in a different way: since there is way more oil being dumped than the microbes can ever hope to eat, the only effective loss term is basically washing up on shore.  The use of a dispersant is inappropriate in a problem this large.  Spreading Corexit only makes it worse, because the diffusion coefficient (D) is now huge, and the oil slick can spread over a much wider area.

Ah, the law of unintended consequences.  I think for oil spills where it's already contained, the use of dispersants make sense.  In this case, though, the dispersant allows the oil to spread over a larger area, and makes the problem worse.
Posted by TheEngineer at 6:16 PM No comments: