A Permanent Fix for the Budget Crisis

Unlike most politicians, engineers are normally paid to provide solutions to problems.  After witnessing the antics of our government over the past few weeks -- and even the more concerning way in which they offhandedly dismiss the threat of a default on the US debt* -- I'm really not sure what US politicians are paid for.

I have a solution.  It's not new, it's not novel, it's not particularly ingenious.  But, based on its implementation elsewhere, it's probably effective.


If Congress can't pass a budget, the senior leadership of both the House and the Senate are removed from their positions.
And Congress can't go home until a decision is reached.
This means the Speaker of the House, the Majority and Minority Leaders of the House, and the Majority and Minority Leaders of the Senate.  We'll leave the President pro Tempore alone for this one, for some semblance of continuity.

The basis for this is in Australia's constitution; Section 57 to be exact.  The actual language is a bit wordy, but here's the summary: if their House passes a bill, and the Senate refuses to pass it ... and that process happens again after three months ... then the Governor-General is allowed to dissolve BOTH houses of Parliament.

Yes, dissolve.  Both. Houses.  Every bum is thrown out (except, notably, for the Governor-General and the Prime Minister.)  And it's happened six times since 1910.  Leave it to the Australians to be thorough about things.

While it would be tempting to throw out everyone in the U.S. Congress (all 535 of them) if a budget isn't passed ... I ... I ... I just can't bring myself to recommend a measure that sweeping.  (I also don't believe it would be adopted.)  Although it's tempting.  And then, we'd be like the United Kingdom, who conducts all of their campaigning for a new government in a 3-week sprint.

Warren Buffett has offered something similar in the past: he said that any sitting Congress that passes a budget that is more than 3% of the Gross Domestic Product should not be eligible for re-election.

There's another basis for this: other than public perception, there's not enough impetus to force a decision in the U.S. Congress, either for passing budgets or for raising the debt ceiling.  Congresspeople are too comfortable -- flying home to their constituents for long weekends even when weighty matters are at hand; never scheduling a single 5-day work week in 2013; still getting their paychecks even when the government is shut down -- that they're not truly motivated to make a decision.  When Congress has a job to do that's mandated by the Constitution (pretty clearly in Article I, Section 7) , their living and working conditions need to start degrading pretty rapidly, frankly, when that job isn't getting done.

Enter the Catholic Church, and the notion of Conclave.  The idea here is to make it suck so badly that the Cardinals are forced to make a decision.  The need for this was crystallized in 1268, when the Cardinals took two years and eight months to make a decision.  See, the Cardinals were enjoying their time in the lovely village of Viterbo in Central Italy.  A lot.  And the locals got upset.  So, they locked the Cardinals in the local church.  Still no decision.  The locals tried starving them out, but food was still snuck in.  The locals then tore the roof off the church, and a decision was finally reached: Gregory X would become the next pope.  In 1996, Pope John Paul II relaxed the Conclave rules a little bit, but they're still stuck in the Sistine Chapel for most of their days.

You may note that, in the solution I propose above, the President is notably absent.  This is unfortunate -- the President is supposed to be a leader, to participate in the negotiations, not an armchair quarterback -- but I can't think of an appropriate punitive action for the Executive Branch in these scenarios.

So, I think there needs to be some drastic, swift consequences when Congress doesn't perform its Constitutionally-mandated responsibilities.  The above action is probably most easily implemented as a House Rule and a Senate Rule.  It would be ideal if it were implemented as a Constitutional Amendment -- but such a movement would have to come from two-thirds of the states, and a national convention like that has never been successful.


*This kind of reckless, off-the-cuff prognosticating about: 1.) an issue that is so immensely important to the everyday lives of the working people and, 2.) something that the Congressmen clearly has no idea what he's talking about, is incredibly offensive to me.  If this were any professional society with a shred of accountability and responsibility, people who make such ridiculous claims would be disbarred, excommunicated, tarred and feathered, or worse.
Posted by TheEngineer at 7:11 PM 1 comment:

A Bug in the Gas Pump

I think I found a bug in the gas delivery system ... or maybe it's in their pricing scheme ... I'm not sure. 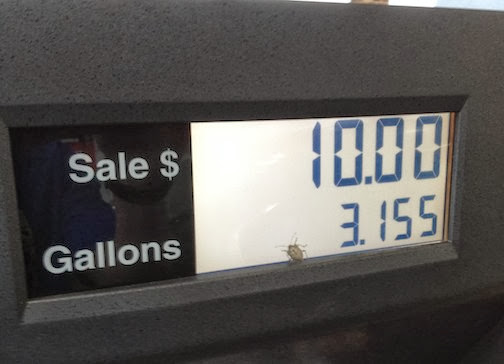 Yes, I checked, and that bug really is INSIDE the display.  I have no idea how it got in there.

I've been thinking a lot over the past few days about what to intelligently write about with the government shutdown, and how to succinctly express my views.

No need.  Jon Stewart has done it excellently.  Please watch the following 7 minutes:

Don't forget -- Jon Stewart and Stephen Colbert led the "March to Restore Sanity"-- and thousands of people showed up on the national mall to support their middle ground approach.  Where has that ethos gone?

Posted by TheEngineer at 7:33 PM No comments: