The title of this post sounds like something that could be written by They Might Be Giants, but alas, it's not.  This is a post by an engineer who knows a thing or two about uranium enrichment and I thought I'd flesh out a few scenarios.

About a week ago, the IAEA released a new report saying that Iran had greatly stepped up its ability to enrich uranium.  The report stated that since November, Iran has tripled its capability to produce uranium enriched to 20%.  (Natural uranium has 0.72% U-235, most commercial reactors need 3% to 5% U-235, weapons-grade uranium is around 80% or higher.  The arbitrary limit on "low enriched uranium" is set at 20%.) Iran is said to be sitting on a stash of about 105 kilograms of 20% enriched uranium, and is capable of adding about 14 kilograms per month to that stockpile.

Additionally, as of 1 year ago, Iran had over 3,000 kilograms of uranium at 3.5% enriched.  That's a fair amount of uranium -- especially considering that Iran only has 1 working nuclear reactor (the 5 MW Tehran research reactor), 1 nearing completion (Bushehr), and one a few years off (Arak).

What does all this mean?  Here's a chart I made to help you understand: 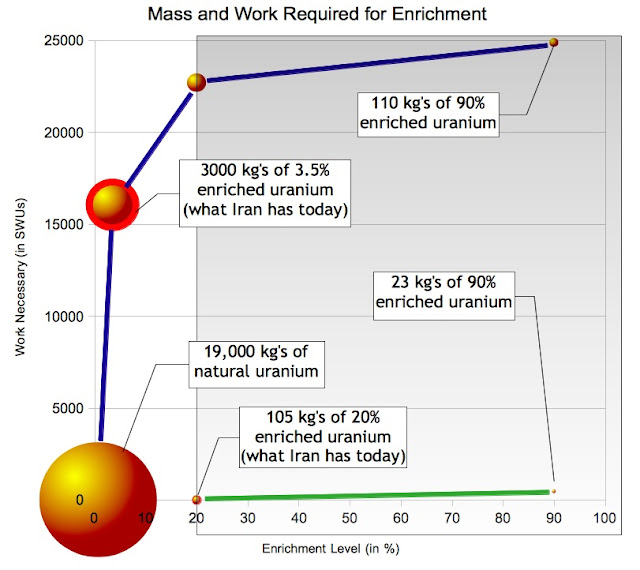 This complicated graph shows three things: enrichment level (on the x-axis), the mass of uranium needed (as shown by the size of the bubbles), and the work necessary to move from one step to the next (as shown on the y-axis).  The shaded region (above 20%) is considered Highly Enriched Uranium, and the IAEA and the nuclear Non-Proliferation Treaty (NPT) prevent a country from going above that.

The "unit of work" on the y-axis is the Separative Work Unit (SWU).  Climbing up the y-axis is really, really hard.  There are lots of SWU calculators on the internet that you can use to figure this kind of thing out, but I wrote my own a few years ago to calculate some off-nominal conditions for a project I was working on.  For you techno-nerds out there, I assumed a tails of 0.2%.

How much is enough?


The IAEA defines a "Significant Quantity" as:

The approximate quantity of nuclear material in respect of which, taking into account any conversion process involved, the possibility of manufacturing a nuclear explosive device cannot be excluded.

Looking ahead
To be fair, there are a few plausible explanations for Iran's actions.


However, to each of the above points, there are strong counterpoints to make:
Conclusions:
It wouldn't be hard for Iran to kick the IAEA out, shut off the cameras, and devote resources towards making weapons-grade material.  Some estimates say that's as little as 2 months out.  North Korea did something similar in its push to make plutonium for its weapons.
So, the bottom line is that while Iran has been obeying the letter of the law per the IAEA, they're also doing a textbook-perfect case of building nuclear-weapons capability "in plain sight."  I made the above chart because I hadn't seen anyone depict this situation graphically before.  Hope it helps.
Posted by TheEngineer at 6:59 PM 4 comments:

Apple Products and Getting Old

I've been an Apple-product user for a long time.  For a really long time, actually, ever since the Mac Plus in 1986.

Memories of Dark Castle, anyone?


To put it simply, even in the dark, "beleaguered" days of Apple in the late 1990's, I liked Apple's business model because they controlled the hardware, they controlled the operating system, and they set the tone for a lot of the software.  In my opinion, that kind of vertical integration was worth the additional cost and, admittedly, the relative dearth of software.

As such, you tend to accumulate hardware, cables, connectors, and other computer detritus over the years. I was excited when I thought I would be able to finally put to use an old firewire-to-Apple connector that has been lying around for many years, now that I am the proud new owner of an iPhone. 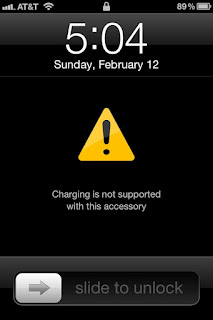 Rats.  They don't even support charging with an old firewire cable.  That hurt.
Posted by TheEngineer at 6:25 PM 2 comments:

A Roadmap for America

In his State of the Union Address, President Obama made reference to getting manufacturing back in America.  In fact, he explicitly said that "this blueprint begins with American manufacturing."

That made me squirm.  This post is to describe why I think all of America should squirm, and what we should do instead.

I squirmed because it strikes me as a wistful desire to return to a bygone era, one that has passed us on and we need to embrace the new change.  We've been through this before, with housing prices: 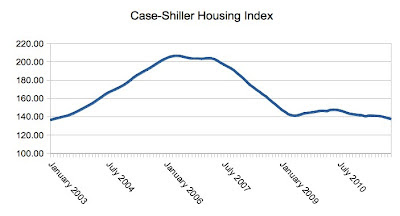 In the 2009-2010 era, I distinctly remember politicians saying "we have got to restore housing prices! Get them back up to where they used to be!"  (Sadly, a Google News search couldn't bring up any direct quotes.)  But the ugly truth was that housing prices were a bubble, and prices were not going to go back up.  For the housing market, it was a great ride up from 2003 to 2007, and we've been "taking our medicine" ever since.

I feel similarly, although not identically, towards manufacturing.  There has been a fervor recently over how iPhones and solar cells are manufactured in China and not in the US.  Why is that?

First of all, the Chinese are willing to work in conditions that would not be tolerated in the US today.  This is described eloquently in the famous piece done a few weeks ago by This American Life.

Secondly, they're willing to do it for far less than minimum wage.  Shenzhen has the highest minimum wage of any city, at about $207 per month.

Third, the Chinese government is backing production in a big, big way:


Admittedly, the electronics industry has the worst labor practices of any industry, but it's telling of how far the "other guys" are willing to go.  When President Obama asked Steve Jobs about why Apple can't make iPhones in the US, Steve replied, "Those jobs aren't coming back."

He's absolutely right.  Manufacturing in China is a step or three below what manufacturing was like in Pittsburgh in the early 20th century: 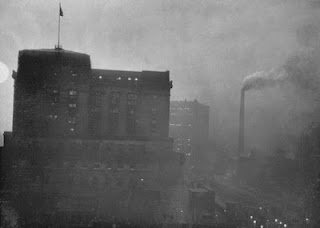 I openly admit -- and heartily welcome -- the fact that Chinese wages are rising (21% last year alone).  I hope that someday in the near future the Chinese worker will have parity with a laborer in the western world.  But that does not mean that the manufacture of iPhones, or most other commodities, will move back to the US.  Instead, they will move to southeast Asia ... or possibly Africa ... wherever the cheapest labor in the world can be found.

The Solution
So, what do we do instead?  America should strive to be an innovator, and stick to the high technology, high capital investment stuff, where the employee has to be smart, skilled, and resourceful.

Here's one example: a government sponsored, nationwide wireless network.  I have no idea how legal this would be, and here's where I need help.

In the 1950's, then-President Eisenhower embarked upon the Eisenhower Interstate System: a network of high-speed roads that would connect the US and allow commerce to flow freely and quickly.  It immodestly touts itself as "The Greatest Public Works Project in History."  The cost in 1991 was estimated to be $128.9 billion (starting in 1956), but wow has it enabled growth in this country.

Why not do something similar for the wireless / networked world?  Roll out a "wireless highway" that anyone can get on to, with bandwidth limits (the 21st century equivalent of speed limits) so that all may partake?

This would be innovative.  It would require a large cadre of network engineers to design, deploy, and maintain.  It would train the next generation of electrical engineers, electricians, construction crews, phone developers, and computer makers to take advantage of our "wireless highway system."  And it might unleash a whole new division of commerce (well, actually, just continue to boost the industry we already have) to take advantage of this new highway system.

That, and examples like it, are my idea of a blueprint for America.
Posted by TheEngineer at 6:05 PM No comments:

Symbols - Am I Getting Old? Fast?

I fear that the infusion of new symbols in today's society may be leaving me in the dust.

But let me develop this concern in a logical manner for you.

A few months ago, I was troubleshooting some computer problem that my parents were having.  Forgive me, I forget the exact nature, but it probably had something to do with iTunes or playing music on my mom's cellphone or something.  So, take a look at the below picture: do you immediately know what the symbols represent?

I remember saying to my mom, "Now, press the 'pause' button."
"Where's 'pause'?" she responded.

It struck me that the Reverse / Play / Pause / Fast Forward symbols that have become second nature to most people in my generation may not be universally recognized.  I only vaguely knew what the symbols meant from my 1975-era Panasonic Take-N-Tape, and that knowledge may not have transferred to those born before 1960.

But those symbols aren't bad.  Perhaps I'm biased, but you can pretty quickly figure out what the symbols mean: they are simple shapes that represent relatively simple actions.  But in today's complex, multifunctional world, symbols are losing their utility.

How about this one? 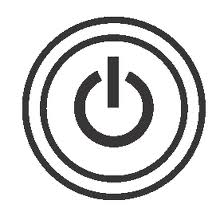 If you haven't been indoctrinated through the use of iMacs, XBoxes, and countless other electronica, you would have no idea that thing thing means "Power."  Some smug engineer is probably very happy with himself somewhere, comfortable in his clever mixing of the old "0" and "1" that used to be painted on rocker switches from Olden Times. 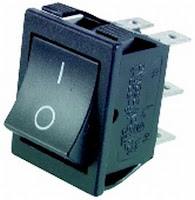 I specifically say "him" because there is no way that the fairer sex would dream up something as convoluted as today's "power" button.  Seriously; look at that thing that represents Power today.  How on earth do you describe it to someone who may be looking at a bank of buttons and is trying to turn the thing on? "Hit the button that has the circle on it that kind of has a vertical line going through it, and is surrounded by a bigger circle..."  No way.

But that's just one button.  We now come back to the original purpose of this post, which is that I'm getting lost in today's proliferation of symbols -- and the computer engineer's penchant for favoring these obscure symbols over WORDS.

This is a screen shot from my web Gmail account.
My eye is immediately drawn to the top row of buttons.


For the last bullet, I admit they do have tooltips that pop up when you hover your mouse over them.  But, come on, they have *tons* of real estate up there, and I hate having to scrub the mouse over each button just to find out what its function is.  Adding a few words would not mar the appearance at all, and would markedly improve the usability of their product.

It's not elegant; it's too clever by half.  I pick on Gmail because it most recently irked me, but I see this "proliferation of symbols" everywhere.  I worry that, since many of us are not the OMGLikeTotallyTweenWTFBBQ24/7 persona that peruses this stuff all day, we're getting left behind.
Posted by TheEngineer at 6:26 PM No comments: