This post is a bit more right-brained than usual.

I do the morning feedings for Bethany, so it gives me some time to daydream in the wee early hours of the morning.  For better or for worse, one of those daydreams goes along the lines of, "How did civilization get to where it is today, and how else could it have gone?"  Please bear with me as I go through a tortured logic path.

1.  I have a hard time believing that Earth is really all that unique.

If you believe the Drake Equation, it's pretty easy to convince yourself that there is at least one other civilization out there, somewhere, that is going through a similar experience right about now.  That previous link provides a cool calculator with which you can enter values you think are appropriate for our galaxy, and determine how many other civilizations might be in our own galaxy.  When you start with a population of 100 billion stars in our galaxy, you have to make some very pessimistic assumptions about some things to make Earth the only intelligent life out there.  So, how are they doing?  How does their development compare to ours?

2.  It's reasonable to assume that another civilization would stumble upon nuclear power, eventually.

Earth like planets out there could have uranium deposits that would have formed from a supernova explosion, just as how Earth's were formed.  Uranium 235 will fission in exactly the same way here as it would on Tatooine.  Smart scientists could presumably mine up the yellowcake stuff (it's very unique) and start playing with it.

3.  But we Earthlings stumbled upon nuclear power in a very unique way.

World War II was the single biggest driver for the development of All Things Nuclear.  According to Richard Rhodes' outstanding book The Making of the Atomic Bomb, in 1944, the nuclear industry was as big as the US automotive industry at the time.  And yet nobody knew about the nuclear industry; it was entirely secret, and entirely focused on making a nuclear weapon.  Entirely focused with a lot of resources behind it.
The US was hell-bent on developing a nuclear weapon, because the US was panicked that Germany would get there first.  Albert Einstein wrote a famous letter to President Roosevelt, begging him to take action to develop a nuclear weapon.  When it turned out that Germany had stopped its program to develop a nuclear weapon (thanks to a miscalculation [?] by Werner Heisenberg), the prospect of a nuclear weapon then became a convenient way to end the war in Japan without an invasion of the island.
The first nuclear weapon was exploded at the Trinity Site on July 16, 1945.  Here's a picture of me at the site: 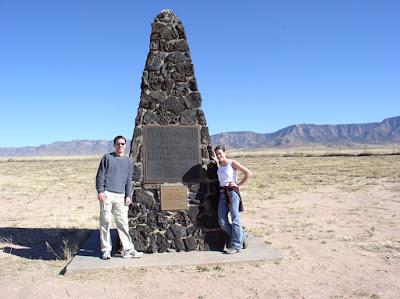 It wasn't until August of 1956 -- over eleven years later -- when the first full-scale power reactor was connected to the power grid, in England.  (Sorry, technophiles, EBR-I doesn't count in my book.)  This, despite the fact that the first critical pile -- in effect, the world's first nuclear reactor* -- went critical in December 1942.
Thus, for almost a decade and a half, the benefits of nuclear power were dedicated solely to the production of materials for nuclear weapons.  So how was nuclear power unveiled to the world?  Through the terrible destruction witnessed at Hiroshima and Nagasaki, mushroom clouds, and the threat of total annihilation.
I propose that this is exceptional; that the development of nuclear power under these circumstances was a statistical oddity, and that almost any other civilization would have stumbled upon nuclear power under less desperate circumstances.  That, perhaps, another society would have stumbled upon nuclear power (probably similar to how Lise Meitner and Otto Frisch came upon it), and said, "Wow!  This is pretty neat stuff!  It's a million times more energetic than any chemical release of energy!"
And thus, the benefits of nuclear power could be brought into the world, without the iconic and terrifying images of mushroom clouds being seared into the civilization's psyche.

Obviously, the recent events in Fukushima have influenced my thinking.  That story has gripped the world's news headlines for a month now, but some other stories with severe economic impacts have gotten much less attention.  Just for one example, a sewage treatment plant failed, killing two workers and releasing up to 4 million gallons of sewage into the nearby river.   Fishing and swimming were prohibited; the TVA had to release extra water from an upstream dam to dilute it more.

Or, as an even bigger environmental incident, there was the coal ash spill from the Kingston Fossil Plant in Tennessee, which released 1.1 billion gallons of coal ash (laden with heavy metals and carcinogens) in 2008.  Hundreds had to be evacuated because their homes were destroyed, and the deposits it left behind make many areas uninhabitable.

Oh, by the way: BP expects to start drilling again the Gulf of Mexico later this year.

Accidents like the above happen all the time.  Society continues on with the mindset that these are terrible accidents that should be corrected, but are not calling for the end of those industries.  I am not trying to say that the above examples are equivalent to the Fukushima accident. (I have my opinions on that, but in this case, I'll keep my opinions to myself and avoid the Internet Flame War that would result.)  The purpose of this post is to provide a plausible explanation for why there is such a visceral response to commercial nuclear power: it was born under a mushroom cloud, and has been trying to get away from that image ever since.

Budget Cuts: Are They Real?

There were two articles recently in the WaPo that caught my interest:

This one, where the CBO finds that the $38 billion isn't all from direct program cuts, and an insightful opinion piece by Ezra Klein on how the $38 billion can be reduced as far as $350 million if you slice it right.

The headline is indeed attention grabbing -- did the politicians really swindle us into thinking they had made a fairly significant cut, when all they had been doing was a shell game?  But then I read the articles, and found many examples of where spending had been effectively taken away from budget swindlers.  Unfortunately, I have been party to those budget swindles many, many times.

Bottom line: at the end of the day, this will result in some real funding not being spent that would have been spent by government.

The first WaPo article makes mention of a few projects for which funding was no longer necessary: $560 million for an Education Department program that no longer exists (holy moly!  that's huge for DoEd!!), $15 million for a US Capitol building that already exists.

I assure you, department budget weenies had one word on their mind:
Reprogramming.

This happens all the time: money is appropriated for one project, and it either comes in under budget (which actually happens from time to time, you just never hear about it), or the priorities change.  At which point, the money is reprogrammed: it is removed from this project and transferred to that project.  This usually requires a few levels of approval, but unless Congress specifically appropriated the money in Congressional language, departments have a fair amount of authority to shift money around.

Which, ultimately, is a good thing, because you don't want Congress to have to micromanage every department.  They do a crummy enough job managing their own finances, as it is.

So, this budget compromise, among other things, effectively prevents budget weenies from reprogramming the money and spending it elsewhere. Which is a good start.

But, for the record, $38 billion is a drop in the bucket (1%) compared to a $3.6 trillion annual spending budget.  Time to start hitting Social Security, Medicare, Medicaid, and even national defense.
Posted by TheEngineer at 1:15 PM No comments: 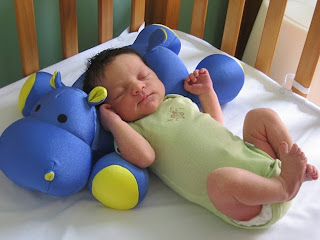 The birth of a bouncing baby girl (our first) definitely gives you a sense of wonder at the miracle of life.  More musings on this when I can collect my thoughts and get more sleep.
Posted by TheEngineer at 1:15 PM 3 comments: