In about two weeks, we'll have an important date that I want to celebrate.  And I want the internet to help celebrate it with me:


10/10/10
That's right ... in about two weeks, Sunday, October 10th, 2010, will be all ten's.  The perfect score on Dancing With the Stars.  A unique manifestation of our base-10 counting system.  And, with a little mathematical manipulation, we can make it come out to a unique number:

Guess what that is?  It's a googol, which is an astoundingly large number. (I know I had to fudge it a little, but 10^[10^(10)] is just absurd.)  There aren't even a googol atoms in the universe.  But our dear friend Google stems from this number, in an attempt to convey how much information Google hopes to store.

There have been a few attempts to stage a Google Day in the past, but they didn't achieve the viral, internet-phenom level of something like, say, Boobquake.  I think this one is different than past Google Days because it has such significance on the calendar.

So on Google Day, pick your favorite Google-hosted website:


And visit it 10 times.  Or a googol if you're really patient.  Google will love the traffic.  And, oh, to celebrate, I might click on a few ads along the way.  --->
Posted by TheEngineer at 7:26 PM No comments:

The internet is broken.  I blame cascading style sheets.

To explain the above (somewhat inflammatory) comment, I need to explain something common to engineers.  A key attribute in almost any well-designed system is known as "graceful degradation" or that the system "fails gracefully."  In practice, this means designing the system such that, in situations where the inputs aren't 100%, the system notices this, and adjusts its output accordingly.

For instance, many laptops (in close coordination with the processors that run them) have different levels of output: when plugged into the wall, the computer will crank out as much performance as it can.  When on battery power the CPU will slow down a bit, and the screen might dim slightly to ease the power draw from the battery.  When the battery level gets below 10%, the CPU might go into a slower, power-saving mode -- slow, but still functional to allow you to get your work done and hopefully save your work.  It's at about this time that the computer starts throwing warning messages at you, along the lines of

Then, once battery power gets to around 1% or 2%, the computer will put itself to sleep (since you're apparently incapable or untrustworthy), in a last-ditch attempt to husband the tiny amount of juice left in the battery while it patiently waits for you to plug it back in again.

This is graceful degradation: decreasing output for decreasing input.

The internet, in its modern form and for the average user, does not fail gracefully.

This was brought to my attention recently when I was suffering through a bad wireless router.  Our computers would download the first part of a web page, then hang indefinitely.  *Very* frustrating.  The below picture is a screen shot where I've cut out the middle section (it was all white anyhow; you're not missing anything):

In this case, I was looking up what "aGPS" is, or "assisted GPS."  The fact that I'm using Safari on a mac is irrelevant; this malady affects all computers and all browsers.

Now look at the bottom: it says, "Loading," and that it's completed 70 of 85 items.  That seems like a lot; 70 of something should imply some level of content.  And yet, the screen is completely blank!  There is no information to display yet.

And here's where the internet doesn't fail gracefully: you have to load almost all of the content, almost all of the time, regardless of your connection speed and regardless of the quality of your connection.  I would think, in any intelligently designed system, the content would come first -- in this case, some text explaining the details of aGPS.  But, no, with the construct of Cascading Style Sheets, you have to load tons and tons of format first -- and the content comes last.

This is a shame, because the whole idea of CSS is to separate content from presentation.  But the internet doesn't prioritize the order in which it sends it to you.

This would happen all the time with our faulty router: it would load the first sections of a web page, then hang indefinitely.  Incredibly frustrating, and I'm sure I'm not the only one who's suffered from this.  Sites designed for mobile viewing (on your cell phone or iPad, for instance) don't really get around this: they just cut down on the amount of formatting, but they still rely heavily on cascading style sheets.

End of rant.  This is a small detail that probably only affects a few people.  But for an entity that seems to take such interest in picayune things, when the website is down, it's incredibly frustrating and I'm surprised someone hasn't already done something about it.

Sometimes I use a text only browser, like Lynx or Lynxlet, just for fun.  Maybe we can overthrow the CSS overlords.
Posted by TheEngineer at 5:06 PM No comments:

Email ThisBlogThis!Share to TwitterShare to FacebookShare to Pinterest
Labels: internet

The Borg is coming, and this is what it looks like in Washington, DC: 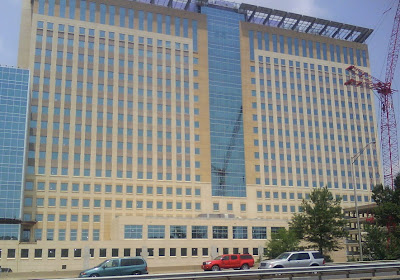 Yes, that's right, it's the Department of Defense's Mark Center, located just off of Exit 4 of Interstate 395 in Alexandria, VA.  If anyone hasn't seen it yet, the building is big and imposing.  Even as it was going up as just a steel skeleton, I would think, "Holy moly, that thing is huge."  It's only 17 stories, which by New York City standards is actually pretty low, but it's designed to hold over 6,400 employees and the site itself is 16 acres -- enormous by NYC standards.
And it's the impending influx of those 6,400 employees that makes this the "Driving in DC" entry.  The nearest exit for this building is off of Seminary Road, and that already isn't pretty around rush hour.  The Army's Traffic Plan (pdf) says they plan for 3,840 parking spaces and that 20% of employees will use the shuttle buses.  Other reports say the shuttle buses will shuttle to the Mark Center from the King Street, Ballston, Franconia/Springfield, the Pentagon, and West Falls Church metro stops.
I sincerely applaud the traffic engineers' efforts to tackle this really, really difficult problem.  Obviously, military planners want a centrally-located auxiliary office building that's near the Pentagon, but not AT the Pentagon. That means inside the Beltway ... and there just aren't very many locations within the Beltway.  But, aaugh, I don't think and extra 3,800 cars coming in and out of the Seminary Road exit are going to make for a more pleasant experience on I-395 at 5pm.  And no matter how you slice it, there is some serious left-turnage involved for those coming in from the south: 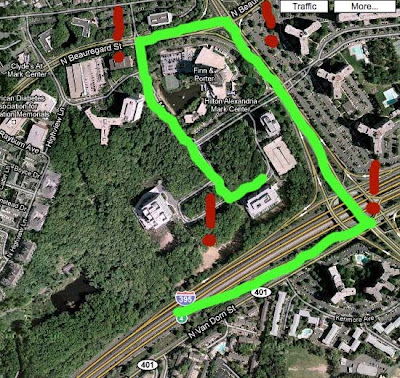 (The Google Maps photo is old and doesn't reflect the new construction over the past two years.)  Add to this the other 15,000 or so workers who are being relocated to Fort Belvoir, and I-95 becomes nearly impassable.  Ouch.
I'm not the only one who's concerned.  In May, Virginia representative Jim Moran stuck language into the 2011 Defense Spending Bill that would reduce the number of parking spaces available for the new Mark Center to 1,000, unless the Army could "fully mitigate the impact on local traffic."  I'm not sure that's a productive way to go about doing things, but I'm sure it got people's attention.
As for me, I plan to watch traffic snarl on the webcam when the site opens in a year or so.
Posted by TheEngineer at 10:19 AM No comments: