To Build an Igloo

In Jack London's "To Build A Fire," the main character ultimately perishes for want of being able to start a flame in some seriously sub-zero temperatures.  I'm gaining new-found respect for the Eskimos, because Jack London's character wouldn't have fared any better if he had tried to build an igloo.  This is hard.
Inspired by this guy, my wife and I decided to try our hand(s) at constructing an igloo.  He really makes it look easy ... nice, neat, regular snow blocks that stack neatly and uniformly to make a dome.  Our courtyard area has tons and tons of snow after the SnowFecta, so we picked a place that looked like it wanted an igloo. 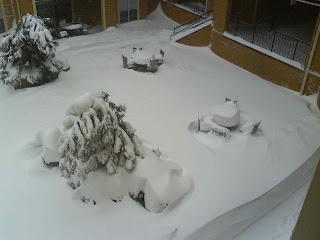 We don't own a snow shovel, which is a bit of a handicap when trying to fill large buckets.  Of course, everyone and their grandmother rushed out to buy snow shovels last week, so it's unlikely that we'd be able to buy one now.  Nevertheless, we got a good two hours of clearing, block-making, and stacking in last night before the light went away.  I was a little disappointed in how things turned out.  In the videos and instructions you see, they make it seem like the snow is made out of modeling clay: easy to shape, grip, and slice around however you like.  Maybe conditions aren't perfect for us, but it isn't packing very well.  The large blocks tend to lose corners or crack through awfully easily, the small blocks crumble in your hands.
So this post is going to be a guide for the "backyard igloo-builder."  I'm assuming your snow isn't perfect; that you don't have a 3 foot machete to cut snow with; that you don't have a 6 foot deep "snow field" from which you can easily cut snow blocks (hah!); and that you're just doing this for the fun of it and not for survival. We've learned a few things in the process:
So far we've got about three layers of large blocks, which is good for 4.5 to 5 feet in height.  It's quite an impressive amount of snow when you look at it, but closing up the top hole is going to be tough. 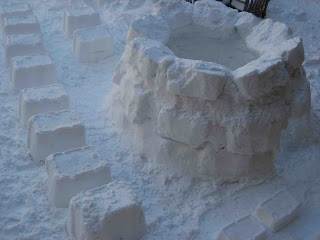 You can also see our construction method: two layers of big blocks (before I figured out that it's a good idea to re-flip them when stacking), followed by a layer of small blocks (mostly crumbs, really), and a 3rd layer of big blocks.  We did the two layers + crumbs last night, and then the 3rd layer this morning.  We're letting the blocks "cook" during the day while we do other things like work.

You can also see the entry hole on the right of the igloo.  An entry hole takes up a frightening amount of real estate!  Make sure you have a good 3 feet of snow (at least!) on the igloo before you start cutting it out.  Also stay as low as possible ... think of trying to dig underneath the igloo to keep as much snow as possible in the walls.

We'll try the next few layers later this evening, and will update the results.
Posted by TheEngineer at 10:14 AM

Email ThisBlogThis!Share to TwitterShare to FacebookShare to Pinterest
Labels: winter