Take, for example, the following "average" street in Washington, DC: 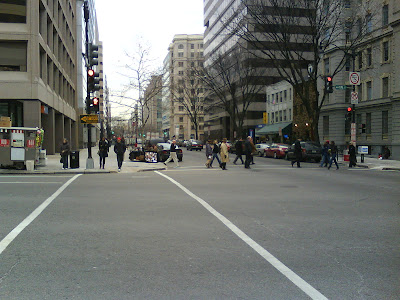 Since I took this picture as a pedestrian on the corner, it's not quite the perspective you'd have as a car ... in that case, you would be about 15 feet to the right from where I took it.  But this still illustrates the point.

It's a normal intersection.  Suppose you need to make a right turn onto 15th street.  Watch out!!!  You may have missed the small writing on the following sign, which I've magnified from the above image: 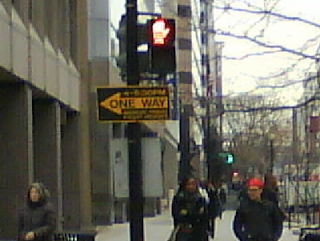 From 4 to 6 pm, you CANNOT make a right turn.  It's one-way going the other way during rush hour.  This is a pretty low-visibility sign to prevent a driver from trying to swim "upstream" against the usual nasty horde of other DC drivers.  If you look at the first picture, there's a lot going on there, and the one-way indicator really doesn't stand out.

To be fair, there is also a "No Right Turn" arrow on the other side of the street with some tiny writing underneath it, but it's equally as hard to discern: 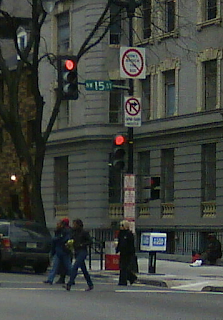 But the point of this post is not to highlight one particular poorly-marked intersection.  This street is not an oddity; there are LOTS of time-dependent one-way streets in DC, subtly marked by those black and yellow signs.

Do these exist anywhere else?  A few minutes of googling turned up nothing; they appear to be unique to the DC area.  Were I a visitor in the DC area during rush hour, the existence of these signs sure would make life difficult.
Posted by TheEngineer at 11:50 AM