Ever since electricity started to be used to do useful work, there has been a drive towards increasing our ability to store that energy in a battery, ready to provide electricity at a moment's notice.

It started with lead acid batteries.  These relatively simple devices have plates of lead separated by an acid.  Placed in series, they create an electric potential across the layers, and the standard has been to put enough of them in series to make 12 volts.  Bigger plates, the more current the battery can provide.
Lead acids are great: they're fairly cheap, they're reliable, and they can hold a charge for a long time.  But compared to petroleum or other chemical means of storing energy, they suck.
See, most people don't realize just how much ENERGY there is available in something like diesel fuel.  140,000 BTU's per gallon, and diesel fuel is fairly stable.  You can actually drop a lit match in diesel fuel and it will extinguish, not ignite.  (Sorry, YouTube doesn't have any cool videos of this.  You'll just have to trust me and the internet on this one.)
Do NOT try this little experiment with gasoline.  Gasoline is more volatile, has a lower flashpoint, and although it "only" has 125,000 BTU's per gallon, it WILL ignite with a match.  It's more common in American engines because it burns faster, so high-output engines that we Americans love so much can be smaller and a little lower weight.
So petroleum has a lot of energy stored in it, it's reasonably easy to pump around and store in large tanks, and the world has grown around it.  It's a very handy form of energy transfer and storage.
If only we could develop a battery that had the same energy storage capacity.  Lithium ion batteries seem to do pretty well at storing a lot of energy in a small and lightweight package -- which makes them ideal contenders for things like laptop batteries and electric car batteries like the Nissan Leaf and the Chevy Volt.  According to this site, lithium batteries can store about 128 watt-hours per kilogram.  To put that in real-world terms here are a few comparisons:
That's about two orders of magnitude difference.  Ouch.
So battery technology still has a ways to go, and there's still the other edge of the sword.  Lithium batteries can be kind of finicky; they require active electronic controls to keep everything hunky-dory.  Failure of those electronic controls can result in bad things.  Remember the spate of laptop batteries catching fire that caused a massive recall?  Active circuits are required to prevent the lithium battery from "going bad."
As energy densities go up, the amount of energy released if the battery is shorted get worse.  There's a serious problem that happens when all that energy decides it wants to get out at once, and it can be hard to stop.  The battery fire I had on my boat, due to shorting a very large (Group 8D) lead-acid battery is one such example: 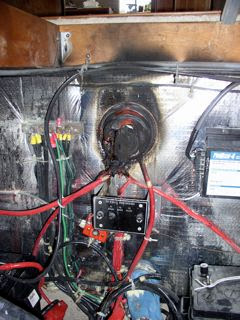 It's like the famous Ford Pinto problem, setting fire to the gas tank.  Lots of energy all released at once.
The road towards higher and higher energy density batteries will be a slightly bumpy one.  As they get more and more common in cars, there will be battery fires.  There will be accidents.  But we shouldn't lose hope.  Just like the catastrophic failures experienced by the early steam engines that powered truly massive locomotives, we must keep perspective of the overall greater good that we're accomplishing by doing this.
Posted by TheEngineer at 5:50 PM