A while ago, I posted about the insane rise of tuition over the years -- it's been about twice the rate of inflation since 1995.

While it's not "new" news, this post is an update to point out college tuition is still rapidly on the rise.  Public schools went up 7.9% (to $7,605), and private nonprofit schools showed remarkable restraint in only raising tuition by 4.5% -- leaving their annual tuition at a healthy $27,000.

This, at a time when the average family income has been flat over the past ten years: 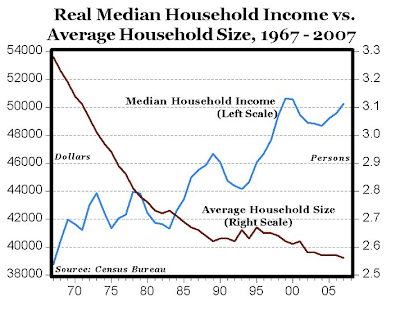 I admit the above chart only goes until 2007, but as I've blogged before, the median household income in 2009 was still only $52,029.
Here's my rant: how on earth do the colleges and universities get away with charging such exorbitant rates for college?  The unfortunate answer is that it's being (largely) funded by Uncle Sam.  The dollar amount of Pell Grants alone have gone up by about 50% over the past 3 years, in addition to other federal aid.
A vicious (or victorious, if you're of the college employed ilk) cycle is set up: the federal government (and other generous institutions) make efforts to provide grants and aid.  This makes more money available in the system.  The universities see this, and ratchet up tuition accordingly.  And banks, which loan a lot of money for efforts like this, get a windfall from the process.
Way back in April of 2009, President Obama called out universities and colleges, asking them to curb the rising costs of tuition.  If I were him, I would have called out a few prominent bankers and university presidents and publicly excoriated them for their largess.

"The banks and lenders who have reaped a windfall from these subsidies have mobilized an army of lobbyists to try to keep things the way they are," Mr. Obama said.  "They are gearing up for battle.  So am I."

Sadly, I never heard the outcome of this.  At least, I didn't hear of a positive outcome, and the recent news that kicked off this post makes me think it wasn't successful.
Here's what really gets my goat:
Harvard currently charges $50,724 for a year of tuition.  By this calculation, tuition should be free at Harvard.
This is freaking ridiculous.
Posted by TheEngineer at 5:40 PM