So, I posed questions a few days ago.

1.  If you go due east from Seattle, where do you hit the East Coast?

Yep, that's right: Seattle is further north than all of Maine.

I didn't believe it at first, either, and thought that maybe the Mercator projection was playing some non-Euclidian tricks on me or something.  Nope.

2.  If you go due south from Atlanta, where do you hit South America?

ANSWER: You don't.  All of South America is east of Atlanta. 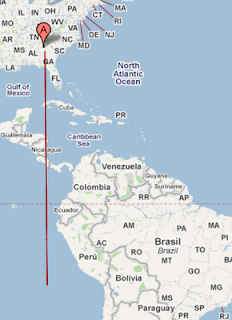 3.  The northernmost point in the United States is determined by some really weird metrics.  Technically, it's the northwestern most point of the Lake Of the Woods.  While that sounds simple, in practice, it's a little complicated and makes for one heck of a squiggle in the northern border of the United States.  It also makes for an orphaned section of land that technically belongs to the US.  How weird is this? 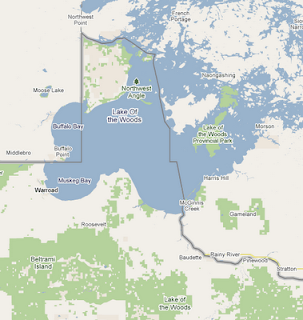 According to wikipedia, the Lake of the Woods was supposed to be divided up such that the "northwestern most corner of the Lake" defined the northern border of Minnesota.  And look -- you can obviously see what they meant: that edge of Buffalo Bay would make a lot more sense.  But, no, upon detailed evaluation, there's some crazy inlet that's just slightly more northwest than the Buffalo Bay.  And hence, there's that slice of land that technically belongs to the US but is clearly connected to Canada.
And people live and vacation on that slice!!  There's an elementary school, there are a couple of resorts (some open year round), and even a golf course.  For the record, these hardy souls live at 49.345 degrees North.  Wow.  Brrr.
So, there's your geography quiz for the week.  All from a little poking around with Google Maps.  Hope you enjoyed it.
Posted by TheEngineer at 4:19 PM

Email ThisBlogThis!Share to TwitterShare to FacebookShare to Pinterest
Labels: education