I've had a few, genuine comments from people in the area of the reactors, looking for advice and thanking me for providing some clear insight.   I was writing a response back to one of them when I just decided to make this my (possibly nearly final) post on the Fukushima reactors.

"one cup of coffee" asked,

If you don't mind me asking, I'd like to know what you think? If, as they are saying, they are able to get power to the plants and restore the cooling system will they have saved the plant from dumping more radiation into the environment? At that point will the situation be "under control?" What exactly would it take to get the situation under control? It seems like the foreign press is obsessed with worst case scenarios, what about a reasonable set of most likely scenarios? And lastly, what about the plutonium? Is this significantly more dangerous than the uranium?

and it spawned a whole host of emotions.  Here's my response.

I'd give it another WEEK before we can safely say that we're "out of the woods" and that there will be no more flare-ups.  A recent report I read said that some of the concrete wall surrounding the spent fuel pool of reactor #4 has fallen away, but that the steel liner remains.  If the pool crumbles, my guess is that it would make cleanup considerably messier, but *shouldn't* provide any additional risk to the general public.

Getting reliable power to the site will help tremendously: they may be able to turn on some of the pumps and ensure good water circulation, and they should be able to get a more reliable flow of water to the core.  But even then, the road ahead is a lot of (boring) circulation of water as the core cools down to a point where they can safely inspect it with cameras and robots. 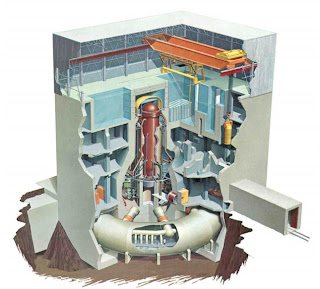 And the plutonium: I've enjoyed looking at what other sites link to mine (thanks Google Analytics!), but some of the sites out there are just absurd.  My jaw dropped at the rampant mis-representation of the facts, and heralding the fact that "Mox fuel is two million times worse than uranium."  Baloney.  Yes, plutonium has a higher toxicity and a lower melting point than uranium, so it's not quite as robust.  It might result in a slightly higher dose to those at the plant (who have tools and equipment to deal with it appropriately), but in no way will it lead to any additional dose to the general public.

Earlier in the comment, "one cup of tea" noted that people have a very visceral response to radiation.  And sadly, that's very true.  Radiation is all around us, and I think people are ignorant of that.  The background radiation you get from the Colorado Plateau is five times higher as on the eastern seaboard, and yet you don't see people fleeing Colorado for the coasts.  And as I noted in a previous post, people are exposed to small amounts of toxic chemicals all the time due to spills and accidents, and yet humanity moves on.  Remember the Union Carbide plant in Bhopal?  A hideous, gruesome release of methyl isocyanate killed thousands and injured tens of thousands, and yet the industry goes on.  I wish the public could put radiation in the same context that almost everything else is, and I guess that starts with education.

Lastly, a comment on frustration: I have read reports from scores of "experts" proclaiming that the Fukushima "crisis" will be worse than Chernobyl and that lives are at risk all around the world.  Where is the accountability?  Where are the apologies when these people are shown to be wrong?  Where is the public excoriation when the "expert opinions" turn out to be nothing more than fear-mongering, playing on the deep-rooted fears of the general public?  When does the loss of credibility set in?

Sadly, it won't.  The nuclear "debate" will continue, fueled more by emotion than by fact when no one in the general public is affected by this event.  And the nuclear "experts" will continue pressing the panic button and gleefully watching the response.  And most of the mainstream media will follow them doggedly because it sells newspapers and it generates interest.

The solution, I think, starts with education.  Patient, careful, instructive education.  I hope I've been able to provide some of that here.

I'll leave with the most recent update from JAIF on the status of the reactors (click for bigger): 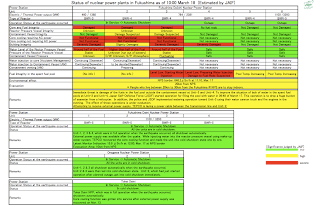 Posted by TheEngineer at 7:29 PM