As I've mentioned before, generating comments from content on the internet is harder than I expected it to be.  Over the past few months, I've spent some time thinking about how to quantify that: how can you score how active a site is on the internet?

One easy metric is the number of hits your internet site gets per month.  To clarify, here is a screenshot of this blog's hits per month, courtesy of the statistics Google provides:

So, I'm averaging about 150 hits per month, although it's been tailing off lately (partly due to the fact that I'm telling Google not to track my own page views).  That's fairly meager, as other sites can get over a million hits per month.

I think another measure of internet popularity is the number of comments generated on the site.  Is the site so popular that people feel the need to put in their own two cents?  In that regard, I'm pretty meager at (as of this writing) 2 comments.  Ever.  But many of the sites I read, I read them because of the comments -- sites like slashdot, armscontrolwonk, and arstechnica often have more meat in the comments (from its readership) than in the original postings.  And then, of course, there are sites like facebook and twitter where the content is the comments.

So, what if you combine those two metrics?  I present the "Measurement of Internet Popularity Score", or MIPS. 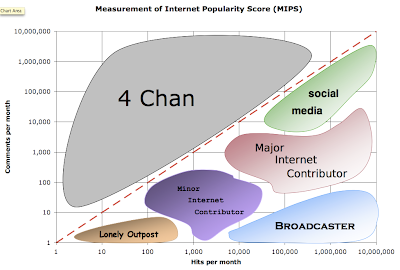 Note the log-log scale.  This covers a lot of ground.  I've highlighted and named a few regions:

It has to have a catchy name, but I'm not sure MIPS is quite it.  In the meantime, help out this blog's MIPS by telling your friends and posting your thoughts (other areas? other names?) in the comments.
Posted by TheEngineer at 7:11 AM