From an engineering perspective, sunflowers are an awesome plant.  About 2 months ago, I dug a few holes, dropped in a few seeds, and then more or less forgot about them.  I forgot about them so much that I even killed a few with RoundUp the following week.

So they're hardy, they grow impressively fast, and they're freaking huge.  The label on the little packet of seeds said "12 feet tall" which I initially dismissed as marketing mumbo-jumbo.  But, no, some of them really do grow to 12 feet tall in less than 2 months.  And the leaves track the sun in their thirst for more juice from the sun.

And the flowers (actually, technically, they're flower heads, as the big yellow thing is actually a bunch of small flowers crammed together) are a marvel of engineering.  According to the wikipedia article:

All of which combines to form one really cute picture: 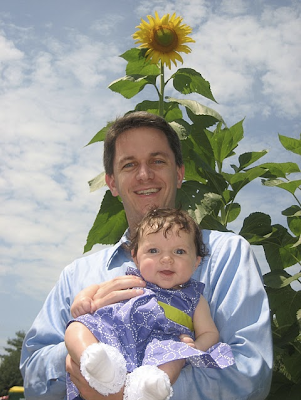 One last note: May 1st is the International Guerrilla Gardening Day, where people surreptitiously plant sunflowers hither and yon.  Hilarious.  I might just be an active participant next year.
Posted by TheEngineer at 1:13 PM