This one goes back all the way to my very first post on Driving in DC.  I mentioned that DC is laid out on a grid with numbered streets running north-south, and lettered streets running east-west, and stated that this was nearly a wonderful idea.  This post will explain my use of the "nearly."

So, letters go east-west, and numbers go north-south.  Something like this: 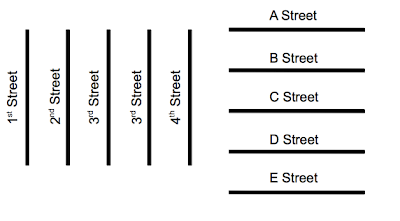 Seems simple, right?  Kind of like Manhattan's grid system, where the avenues go north-south and the streets go east west, Washington, DC should be a similarly easy place to navigate?

The problem is, in Pierre L'Enfant's twisted mind, it was perfectly logical to place the origin of the coordinate system smack dab in the middle of the city: the US Capitol.  Thus, four quadrants are established.  Suddenly, instead of just an intersection, you now need a third piece of information to find the destination you're looking for.  (And, of course, the city designers were not so mathematically inclined so as to include negative numbers and negative letters in their street naming convention.)

To illustrate, let's say you're new in town, you've heard great things about the new Arena Stage, and a friend told you it's at the intersection of 6th and M.  If that's all you know, you have a 25% chance of finding the right spot on your first guess. 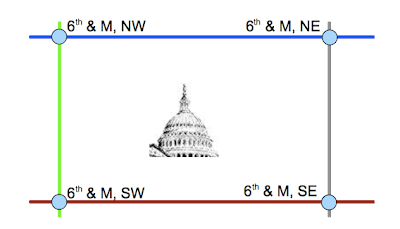 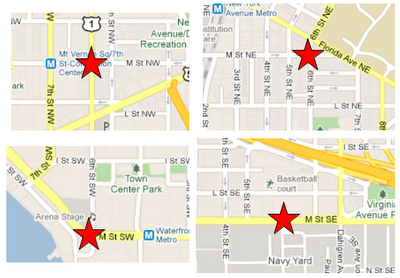 This may seem trivial or minor, but when I used to live in Southwest DC, three or four times per year I would have to redirect some poor lost soul who had mistakenly wandered into the wrong quadrant.  People who live in DC or have to navigate there often learn to instinctively pick up on the "NW" or "NE" label (or just assume NW if there is no other distinguisher), but for any newcomer, beware.  It makes a BIG difference.
Posted by TheEngineer at 5:59 AM