Driving in Washington, DC, is an interesting experience.  In this context, "interesting" can be further refined as any of the following:
Often, driving in DC is about as effective at getting you from Point A to Point B as Brownian Motion.  Notice, however, that I left "efficient" as the last bullet.  To be fair, in about 5% of cases, the driver says, "Holy crap, there's [insert road] that will take me directly to where I want to go!"  Sadly, in the other 95% of cases, some serious intestinal fortitude and luck are required to get you to where you want to go.  Observe. 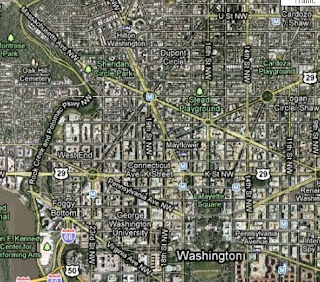 DC starts out with a grid pattern: numbered streets (7th, 9th, 23rd, etc) running North-South, and lettered streets (K Street, M Street, etc) running East-West.  This is a nearly wonderful idea. (The "nearly" will be explored in a later post.)  It works well for Manhattan: 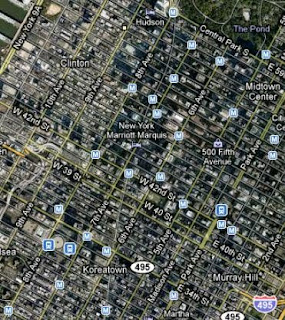 In the grid pattern, if you know where you are, it's pretty simple to figure out how to get where you want to go.  (I admit to biasing this to mid-town Manhattan.  Lower Manhattan is not as orderly, but I'm willing to cut them some slack due to geographical constraints.  The island narrows down there, and it's harder to maintain a grid.)

But then Pierre L'Enfant played what is perhaps the greatest practical joke of all time: completely obfuscating another nation's Capital city and making it utterly bewildering to visitors.  He took what was said to be a "clean slate" and overlaid a haphazard arrangement of diagonal streets on top of the grid.  These are the states: Pennsylvania, Massachusettes, New York.

Taken by themselves, the diagonals aren't so bad.  But where the diagonals intersect with the grid is where it all falls apart, and you have an inscrutable network of acute and oblique angles of intersections.  And where two diagonals meet, on top of the grid, only Dante can describe it: Abandon all hope, Ye who enter here.

That's right, Dupont Circle.  I'm lookin' at you.  You will be featured prominently in these pages.

In a final touch of class, our dear Frenchman inserted a few final obstacles: parks, squares, and the maelstrom known as the Rock Creek Parkway.  Some of these are quaint -- and they go a long ways towards making the city more friendly -- but their haphazard locations, sizes, and shapes make me genuinely discombobulated as I'm trying to drive around.

A walking city?  Perhaps.  But a driving city?  Fuhgeddaboudit.

I have lived in DC for 10 years, and the Rock Creek Parkway still scares me.  There are those who claim to have mastered the RCP, and they claim to value its utility.  I don't believe them.  My general rule is:

If you don't know exactly how to get from A to B, don't even start until checking the map.  You WILL NOT be able to figure it out on the way.

Anyhow, enough mindless ranting.  No assertion is worth much unless it can be documented and demonstrated.  So that's what the purpose of this series is: documenting examples of the crazy, intimidating, and obtuse "sport" that is known as Driving in DC.  If you have examples of your own, shoot me an email or leave them in the comments.