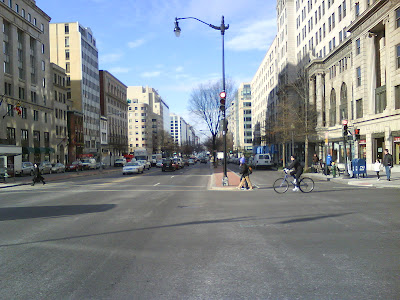 World famous for its high powered lawyers and lobbyists who plant their offices on its path, K Street sits nestled between I Street and L Street.  ("What?!?" you ask.  "The letter K is between the letters J and L, not I and L.  Where is J Street?" I smugly point out another oddity of Washington DC: there is no J Street, for reasons that are not entirely clear.  I will discuss this later.)

Between 15th Street and 20th Street Northwest, K Street espouses this utterly bizarre double-boulevard approach.  In the center is your normal, opposing-traffic road, with two lanes going in each direction.  Then comes an inexplicable island on each side, and then a "turning lane."  I use "turning lane" loosely because you don't always turn in the "turning lane."

There are three critical flaws for drivers who attempt to use this section of K Street:

But it's not always a simple merge, because some traffic is already in the "turn lane" but wants to go straight.  You have to fight and claw your way into this stream early if you want to turn, and nobody is willing to yield the right-of-way.  This is why you're not allowed to turn right from the center lanes -- you would be cutting off that traffic that is trying to go straight through the intersection from the "turn lanes."

Turning Left
Many of the intersections between 15th and 20th do not allow left hand turns, but a few do.  On those that do, the left turners must not only artfully dodge the immediate two lanes of opposing traffic, but must also navigate the opposing "turning lane" traffic.  This is especially difficult because, in a string of cars, it's impossible to see which ones have their right-turn blinkers on and which ones don't.  You have no idea what the intentions are of the opposing "turning lane" traffic, and half the time it's a guess and you hope the opposing traffic doesn't mash the gas pedal just to ram into you.

Turning onto K Street
If you're coming from any of the side streets, and you turn right onto K Street, you're only allowed to turn into the "turning lane."  At the next intersection (a block or two further down), you are supposed to merge into the center lanes to get with the flow of traffic.  But be careful!  Some of the traffic is trying to merge from the center lane into your "turning lane."  Heaven help you if it's a cab and you're in his way.

Summary
I see many disadvantages to this system, and few advantages.  It is a very cruel and disorienting arrangement, particularly to drivers unfamiliar with K Street.  It's also the only street in DC that I know of to be set up this way.  It certainly wastes a lot of space; I would rather see an extra full-traffic lane or two carved out for K Street (it gets very busy and congested during rush hour), and maybe even room for a wider sidewalk.

Fortunately, I'm a pedestrian most days on K Street, so I don't have to deal with these intricacies.  But the multiple lanes of traffic sure make me feel like Frogger some days.

Post Script
I said I would talk about the absence of "J Street."  The urban legend -- and one that I subscribed to for many years -- was that Pierre L'Enfant, along with most of the rest of the country, was incensed at John Jay for signing the Treaty of Amity, Commerce, and Navigation with Great Britain, that was far too kind to Great Britain and the fledgling US got nothing in return.  For punishment, Pierre removed "J Street" from the DC street grid.

However, the venerable snopes.com has a different explanation: that the letters "I" and "J" were too hard to distinguish, so J was omitted.  This makes more sense than the urban legend, since Pierre was removed from his job in 1792, and the treaty wasn't signed until 1794.  This is also stated as the reason by both Wikipedia and a former DC tour guide, although it's possible that all 3 are quoting the same source.
Posted by TheEngineer at 4:41 PM