Japan's 8.9-magnitude earthquake may well turn out to be one of those nation-defining moments that is seared in the psyche of its citizens.  My thoughts and prayers go out to the millions without electricity, without homes, without food, without clean water.  When the earthquake hit, almost all major electricity-producing entities shut down.  Including nuclear facilities.

Here's what's going on in mostly plain English, for the readers out there who might come across this site. 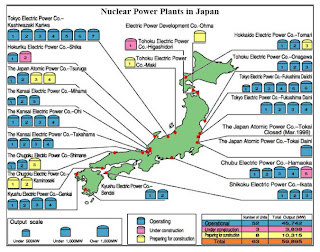 First of all, it's important to keep this in perspective: Japan has 52 operating nuclear power plants, and the issue at hand relates to 7 units.  The other 45 have handled the earthquake and tsunami acceptably. 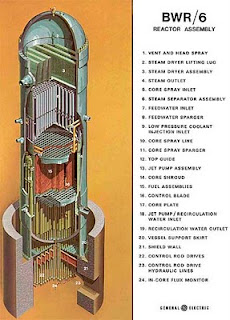 Three of the reactors at Daiichi were operating when the quake hit: units 1, 2, and 3.  They're all Boiling Water Reactor types (dangit! the physics just got harder), and they produce between 440 and 760 megawatts of electricity -- each.  Assuming they're 33% efficient, that's almost 6,000 megawatts of power that they produce, total.

When the earthquake hit, they all began a normal shutdown procedure by driving the control rods UP into the core. (You normally think of control rods falling DOWN into the core, but this is a boiling water reactor, which means things are very different for various reasons.  In a BWR, the rods come up from the bottom.  See figure.) This shuts down the nuclear chain reaction -- but it doesn't stop the generation of heat.  This continuation is from the continued radioactive decay of the core, known as decay heat.

Nuclear engineers have a few rules of thumb about decay heat: at time of shutdown, it's typically about 5% of the initial core power, and declines steadily (although not linearly) after that.  In this case, 5% of the initial 6,000 megawatts of power means it's still producing about 350 megawatts of power. (Note this is just thermal power, not electricity, as the turbines are isolated as part of the shutdown procedure.)  Simple physics and heat transfer dictate that the heat must be removed -- or the reactor starts heating up.

A former mentor of mine, when teaching a reactor thermohydraulics course, wisely stated it as:

The reactor is going to get the heat out, or it's going to die trying.
That's kind of where the Japanese are (or were, as of last night) with their reactors.  If the 350 megawatts of heat isn't removed from the core, the core starts heating up.  To address this, all reactors have circulation pumps to move cooling water around and remove the decay heat.  But what powers the pumps?

The cooling pumps have multiple, independent power sources, nearly all of which were wiped out by the tsunami: remote power stations went offline; the diesel generators either didn't work or were damaged by the tsunami; but they did have battery backups that lasted for a little while.

As things heat up, the pressure increases.  This is okay, up to a point.  The Tokyo Electric Power Company (TEPCO) has notified the Japanese government that they have initiated a few releases of steam -- basically, a controlled burping the reactor.  The World Nuclear News site says that pressure is normally 400 kPa, and the "burping" starts at 840 kPa.

Does this release radioactivity?  Well, theoretically, yes.  It does.  There are trace amounts of tritium, activated nitrogen, and activated oxygen in the cooling water.  But the amount is very, very small, and does not present a hazard to life, or a significant risk for cancer.  It's a drop in the bucket compared to the amount of natural background our bodies are exposed to every day from the earth and sun.  I'm quite sure this point will be lost or glossed over in the press headlines over the next few days.

Then there was an explosion at one of the containment domes at the Daiichi site.  Wow; that got my attention this morning.  The burping cycle I described above can keep things under control for quite a while (as long as you've got backup power to run the pumps, which they appear to have fixed the generators, and they are now pumping seawater into the reactor for makeup water).  The question is, did the explosion come from the reactor itself?  Or something outside the reactor?

In this case, it appears to have come from outside the reactor.  During this burping process, things can get pretty hot.  Hot enough, in fact, to separate the oxygen from the hydrogen in water.  So now you have hydrogen and oxygen floating around, and they get burped to the containment dome.  A small spark from the stator of one of the cooling pumps is all it takes to ignite the hydrogen, and poof.  (Apparently these pumps aren't ignition protected, which IS a requirement in US reactors today.)  An unfortunate explosion inside the containment dome.  That's better than the reactor exploding, but it's undesirable because you've now lost one of the (many) protective barriers between the fuel and the outside world.  I don't know what damage was done to the reactor in the explosion.   Modern day reactors are designed to handle this; the three Daiichi reactors were built in 1971, 1974, and 1976, and I don't know what design criteria were in effect then.  The four reactors at Daini were all built in the 1980's.

Lastly, some perspective:
Chernobyl: Absolutely, positively, NO CHANCE of something like that happening here.  At Chernobyl, the operators were doing something stupid, ignoring at least 4 levels of safety alarms and automatic shutdowns, and managed to get an aging reactor (designed in 1954) into an unstable condition that is totally impossible in any modern reactor (including the ones in Japan today).  The reactor went prompt supercritical, blew the lid off the reactor vessel, exploded the reactor building, and sprayed fuel elements around the countryside.  Not remotely possible here.

Three Mile Island: Distant possibility of that happening here, but even in that case, it's important to remember: even though 30% of the core melted, "there will either be no case of cancer or the number of cases will be so small that it will never be possible to detect them. The same conclusion applies to the other possible health effects." Wikipedia has a good summary of the incident.  In this case, the operators have seawater available, they appear to have power to operate the circulation pumps, and it's just a waiting game until remote power can be restored to the sites.


So, that's where we are now, as of about 9:00am EST on March 12th.  Certainly, an industry-defining moment.  Many will proclaim this to be another nail in the coffin for nuclear power; many will hail this as showing that nuclear reactors can safely withstand an 8.9 magnitude earthquake.  Me?  I'm somewhere in the middle: yes, the design appears to be working okay (even though this is one more reason that I don't like boiling water reactors and prefer pressurized water reactors), but why weren't the diesel generators housed / located / sized / reinforced to handle the tsunami?  If those generators had worked like they were supposed to, we wouldn't be in any of this mess.

Here are the sites I'm going to be following:

Posted by TheEngineer at 6:14 AM